About That Addison Russell Ball

The Cardinals are understandably – though ultimately wrongly – upset about the Addison Russell RBI single that paved the way for the Cubs win in Chicago last night.

First you can see the play here (hey, MLB, why not make it embeddable?).

Now, you can see it was a close play. It first hits outside the line, then inside the line and then right on the line or just on the outside once it passes first base.

Mark Reynolds and Seth Maness (who was ejected for his troubles) were immediately adamant that it was foul, even as the Cubs were rounding the bases and the umpire called it fair. And the play was not reviewable, due to a quirk in the replay rule as Derrick Goold explains.

For his part, here is what Cardinals manager Mike Matheny’s beef with the play:

“It’s a shame that we have this technology and if there’s a play that could change the course of the game, why not use the technology to the best we can?” Cardinals manager Mike Matheny asked after the loss. “If it’s inconclusive, it’s inconclusive. But if it’s a blatant miss – which I have two players over there screaming and yelling that it’s a blatant miss – it’s a shame that there’s not something allowed in the system just in case of human error.”

But was it a blatant miss?

Craig Calcaterra, an otherwise reasonable human, writes at Hardball Talk that it was a “bad call” and asserts unequivocally that “Russell chopped one down the first base line that first hit in foul territory then skipped past first base, also in foul territory.”

He also claims, “The announcers entertain the notion that the ball crossed over the bag in fair territory, but for that to be possible the ball would have to travel in such a manner as to make the Warren Commission’s magic bullet look like the straightest thing ever.”

Here is a screen cap of the ball bouncing fair before it gets to first base: And here is the ball bouncing after it gets past first base: 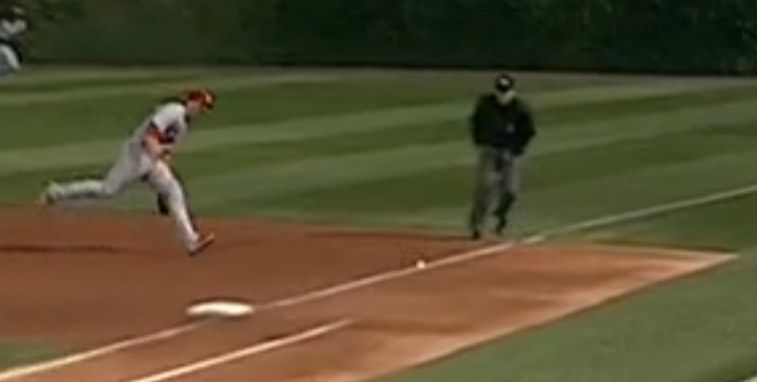 It is clear from these images that the ball was fair before it gets to first and either on the line or just outside the line after first – making it pretty clear the ball passed over first base on its way.