This installment features a huge jump in talent – featuring an All-Star, a Gold Glove winner and a few October heroes.

From this point forward, everyone on the list has played a full MLB season, and most of them have received accolades for their accomplishments.

These players, unlike the previous installments, are already franchise cornerstones. Any trade of players 6-10 would bring in an absolute bounty in return.

And away we go, with the player, their team and where Baseball American and Baseball Prospectus last had them ranked as prospects … 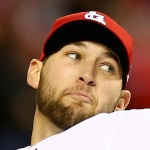 St. Louis has an uncanny ability of unearthing the most out of their college talent. Texas A&M alum Michael Wacha is no different. After serving as the Aggies ace, Wacha was selected by the Cardinals, where (when healthy) he’s been a stabilizing force. Wacha, 23, was electric during the 2013 postseason, winning the NLCS MVP for his 13.2 scoreless innings versus the Dodgers. After a brief hiccup in the World Series, Wacha was looking forward to continued success in 2014. He was on his way, but then injury struck. A stress reaction in his throwing shoulder limited Wacha to five appearances after June, including a disastrous appearance vs San Francisco in the 2014 NLCS. Wacha insists he’s over the injury; when healthy, Wacha uses a mid-90s fastball, a changeup and a plus curveball to induce positive results. Over his career, he’s posted a 3.04 ERA (3.08 FIP), with 159 strikeouts and only 52 walks in 171.2 innings. Wacha is slated to begin the season in the Cardinals rotation, with much room for growth if he can stay healthy.

Wil Myers, he of the surfer’s hair and laid-back attitude, is the most surprising non-Californian in today’s game. Luckily for the 24-year-old North Carolinian, he was traded to San Diego from Tampa Bay this offseason. The 2013 AL Rookie of the Year had an off year in 2014, struggling to a .222/.294/.320 line and dealing a wrist injury for most of the season. Although fellow Padres outfielders Justin Upton and Matt Kemp are more well known, it’s Myers who takes center stage as the crown jewel of the Padres’ intriguing offseason. He’s going to have to prove two major things: that he can regain some of the .158 he lost off his OPS, and that he can play center field at an adequate level. The former is more likely, as his suppressed 2014 line was brought down by injury and bad luck (.076 lost off of his BABiP). The latter, however, will be harder. He’s been an adequate right fielder, but centerfield is a different animal, let alone in spacious Petco Park. He’ll have to succeed there quickly, or the Padres may turn to Kemp to replace him. Regardless of his defense, Myers still has oodles of power potential. In his ROY season, he hit 13 home runs and 23 doubles; he surely has gap-to-gap power with potential for more. Myers should be a big part of a resurgent Padres team.

Yordano Ventura is one of the most exciting pitchers in the league. Ventura, who turns 24 in June, showed a great deal of potential for the pennant-winning Royals. With a fastball that sits 97, a very effective curveball and a workable changeup, Ventura showed glimpses of his astronomical ceiling, while also showing his youth and room for improvement. Even with that fastball (he can hit 101 on occasion), he only struck out 7.8/9 IP, which is more in line with Brandon McCarthy and Scott Kazmir, who throw nearly 5 mph slower. Nevertheless, while veterans James Shields and Jeremy Guthrie were imploding around him, he was a steady hand for Kansas City in October. Ventura’s 3.20 ERA (3.60 FIP), impeccable stuff, and improving control are solid jumping points to the next level up. To make that jump, Ventura will have to improve his command, giving up less flyballs and inducing more groundballs. With Shields more than likely out of the picture, Ventura could be Kansas City’s Opening Day starter, an honor he’d deserve. Yordano’s nickname, Ace Ventura, could be much closer to reality in 2015.

After initial struggles in the majors, Julio Teheran came into his own in 2014. The 24-year-old Teheran made his first All-Star team and eclipsed 200 innings for the first time, all the while improving his control and limiting his home runs. Teheran threw four complete games, and was ninth among National League pitchers in WAR (4.4). He doesn’t throw bullets, but has more than enough to get by; Teheran’s fastball averages 92 and he can ramp it up to 96. Combined with a slider and curveball he uses to get swinging strikes and a changeup that induces very weak contact, Teheran has become an efficient pitcher. Teheran is the best young pitcher the Braves have, and they have quite a few of them. Alex Wood (No. 12 on this list), Mike Minor and Shelby Miller are all talented, but they play second fiddle to Teheran, as the Colombia-born right-hander has surpassed them all. Considering offense will likely be an issue for Atlanta this year, Teheran and the other young Braves will have to shoulder quite a load for the team. However, Teheran has the ability to excel regardless. Expect Teheran to make the Opening Day start for Atlanta.

If not for his famous (yet injury prone) teammates, two-time Gold Glover Nolan Arenado would be much better known. Arenado, who turns 24 in April, has become a crucial player in the Rockies rebuilding effort. He’s a plus defensive third baseman with an improving bat and an idea of what he’s doing at the plate. The defensive metrics match his reputation, as he’s been worth a total of 46 runs above average at third. As previously stated, Arenado’s bat is much improved. He gained .122 on his OPS over his rookie year, while cutting down on strikeouts and improving his walk rate. He’s showing power potential, posting 34 doubles and 18 home runs, though 16 of those home runs (and 57 percent of his total extra base hits) came in homer-happy Coors Field. Arenado missed the last part of the 2014 season with pneumonia, but all systems are go as of now; he can cement his role as an emerging star in the game with a solid 2015. Arenado is set to be a middle-of-the-order bat for Colorado, bringing with him an emerging bat and a spectacular glove.